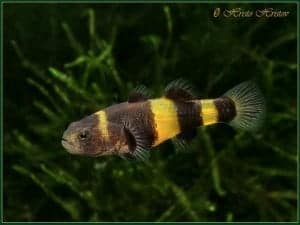 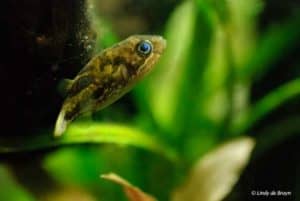 Channa Andrao is the smallest and most peaceful snakehead. The species combines with other fishes very well, under the condition that they are not to small or aggressive. These fellow occupants must be able to endure a seasonal drop in watertemperature that is neccessary for good health

Channa, commonly known as Snakeheads, are primitive predatory fish and members of the family Channidae. They are a group of perciform (perch-like) fishes whose affinities are unknown, although recent studies on the molecular phylogeny of bony fishes consider snakeheads as most closely related to the labyrinth fishes (anabantoids) and the synbranchiform eels, which include the spiny eels.

The genus Channa contains 31 species that are native throughout Asia from are native from
southeastern Iran and eastern Afghanistan eastward through Pakistan, India, southern
Nepal, Bangladesh, Myanmar, Thailand, Laos, Malaysia, Sumatra, Indonesia,
Vietnam, Korea, and China northward into Siberia.
3 species of the closely related genera Parachanna are native to parts of Africa.

The different species of Channa vary in size considerably. The term dwarf snakeheads is coined by aquarists to describe a group of Channa species growing only 25 centimetres: Channa bleheri, Channa cachua, Channa Orientalis and Channa andrao. These species are most suitable for keeping in an aquarium because of their size and their relative docile temperament.

Most of the species grow to a maximum length of 30-90 centimetres. Besides size, this intermediate category contains the most diversity in behaviour since some of the species are closely related to the dwarf species, and some relate more to the category of monster fish.

5 species (A. argus. C. barca, C. marulius, C. micropeltes and C. striata) can even grow up to 100 cm or even larger and can be considered monster fish that are barely suitable for aquaria.

Fossiles dated from 50 million years ago indicate an origin in the southern Himalayas (India and East Pakistan). From 15 million years ago and on, the animals have spread by the expanding intertropical climate zone to parts of Europe, Africa and larger parts of Asia.

Channa have an elongated body and are distinguished by their long dorsal fins large mouths full of teeth. They earn their common name Snakehead because their flattened shape and the scales on their heads that are reminiscent of the large epidermal scales on snakes.

Channa have gills to breathe water like most other fish. However, subadults and adults can also breathe air to supplement their demand for oxygen. Snakeheads are in fact obligatory air breathers and must have air from the surface otherwise they will drown. Unlike many other airbreathing fishes, Channa have a series of cavities in the rear section of their head. These suprabranchial chambers are filled with folded tissues that have a high surface area, and allow oxygen change to occur directly between air and their blood. Unlike mammals, they lack a diaphragm and use water to exchange old air with fresh air each time they take a breath. Thus, their ability to breathe air when out of the water is limited. They appear to breathe air more frequently when swimming actively.
The genera Parachanna (native to parts of Africa) is described apart from the genera Channa because of a more primitive implementation of the airbreathing section.

Snakeheads are known to migrate over short distances over land to find other water basins, using the ability to breathe air. When moving over land they curve their body in an S shape first, before launching themselves forward by a powerful stretch. In high humidity conditions, Channa are able to survive from 2 up to 4 days out of the water. When placed in direct sunlight, however, they desiccate and perish in minutes to several hours. In contrary to what is believed, Snakeheads are not known to leave the water for any reason other than making their way back to the water after flooding. The only true Snakeheads to actively leave the water are some of the smaller species, C. gachau and C. orientalis, C. asiatica, and C. amphibeus, and still there must be an obvious reason for change.

Snakeheads are able to live in varying water conditions. Some species are bound to a subtropical climate zone. For good health, these species require cooler water temperatures., at least for a seasonal period.  Most snakeheads can tolerate a very large range of water parameters (temperature, PH, GH, level oxygen). However, they are very vulnerable in case of sudden changes.

Channa are predatory fish that prey in the juvenile stadium on plankton, insects and snails. While they grow the larger species switch towards a menu that consists mainly of fish, frogs, crabs, shrimps, small aquatic mammals and birds.

Before adulthood most Channa species hunt in groups. When becoming sexually mature they start a solitary life and develop a high level of aggression against their own species and other fish. When a couple has formed most species do not tolerate other fish.

Channa are not active swimmers and, when not feeding, tend to move only when surfacing for air. They spend a lot of time hovering in midwater or resting on the bottom within cover as ambush predators. Some larges snakeheads, however, live a more pelagic life and are far more active swimmers. All snakeheads are capable of powerful bursts of acceleration. They curve their body in an S-shape and launch themselves forward by stretching.

Parental care is a behavioural characteristic of Snakeheads. Both parents protect and guard their young vigorously. The majority of the species guard their eggs at the surface of the water. Some of the smaller species are mouthbrooder. Only some species are Cave spawners.

Amongst specialist aquarists, Channa is a popular -oddball- aquarium fish.  Snakeheads are elegant, alert, clever, restful and powerful fish, with lots of personality. Their communication with conspecifics their hunting skills and breeding behaviour is fascinating. Some aquarist even specialize themselves by dedicating their large fish tank to the largest specimens. Sometimes they maintain a pet-like connection with their monster fish. Some rare and attractively marked species (like C. Barca) belong to the most expensive aquarium fish in the trade.

Some Snakeheads display considerable changes in colour pattern while growing. In the early days of classification of fish species this formed a lot of confusion since in those days, colour was still considered a criterium for classification.
Besides some dwarf species, many juveniles are more attractively marked than adults. With age species often develop a browner, more drab look. Because of this phenomenon, some aquarists lose interest in the fish while it grows. Those considering their first purchase should be well aware of what they are getting into.

Because of its predatory nature, none of the Snakeheads are a suitable choice for a community tank. Most of the species will quickly empty a general community tank with smaller fish. Thus a dedicated aquarium is required for keeping snakeheads.
Aquarists have very diverse experiences when it comes to combining Channa species with other robust fish species. In general, most species are probably best kept alone. The level of tolerance towards other fish varies per species, but also seem to vary per specimen or specific situation. Combining Channa with other aggressive and territorial fish species, like members of the Cichlidae family is a strategy that does not work out well. A Channa that is intimidated will hide, try to escape the tank and refuse to eat.

Because of their size and relatively mild temperament, most of the dwarf species can be combined with fish from 2/3 of their own length, as long their tank mates are not overly aggressive. Keep in mind that most of the members of the dwarf species are native to areas with varying water conditions, depending on the season.  A seasonal drop of water temperature is required to maintain good health.

Many medium-sized channa (30-60 cm)  should be combined with relatively fast swimming and robust fish, like larger cyprinids.  The general opinion is that changes are best if the Snakeheads are not fully grown and the other fish are already settled. Newly introduced fish are often killed, even when they do not fit their mouth. Mostly, however, the co-existence is temporary: When a couple is formed often all other fish are hunted and killed.

These species require a lot of space. Most private aquarium setups are just large enough to host only 1 or 2 adults. Young species often can tolerate conspecifics and other robust fish very well. Newly introduced fish are often ripped apart instantly. Adult fish (especially formed couples)  develop the maximum level of aggression. Most of the time they are last fish standing in an aquarium set-up.

These species require a lot of space. Most private aquarium setups are just large enough to host only 1 or 2 adults. Often, newly introduced fish are ripped apart instantly. Some species are important for human consumption but are considered highly invasive and destructive for other ecosystems.

Channa Andrao is the smallest species of the Snakeheads (maximum 11 centimetres). Channa Andrao is also the most peaceful member of the family. This species can be combined very well with other fish species as long as they do no fit in their mouth or are non-aggressive.

Male grow larger and are more colourful than females.

Channa Andrao is endemic to the Brahmaputra river, northwest Inda (Jalpaigur region), in a swamp in the vicinity of Barobisha town. This habitat displays dramatic seasonal fluctuations in temperature, water volume and flow. Water temperature drops in winter to 19 degrees C en raises in summer to a range of 22-28 degrees C. During the winter a large part of the habitat dries out. Channa Andrao pulls back in buried burrows, with a maintained water level. Most of the time one burrow is occupied by one couple only. These observations have led to the false name Channa amphibious. Hunting en breeding finds place during the warm summer season, after a heavy monsoon flood.

An dim-lighted aquarium with dense planted area, open swimming places and with a lot of place to shelter. Use a tighly fitting hood since channa species are true escape artists. A gap between the waters surface and the hood is needed since they need to breath from the surface

Keep the temperature in summer at a maximum of 22-24 degrees C. In winter season this species requires a drop in temperature to 15-20 degrees C. In this period less food is required.  A cool period is neccesary for good health: maintaining a high temperature often leads to general weakness and (lethal) bacterial infections.

Keeping this species with a slightly lower PH level seems to result in more distinct colours.

Channa Androa can be kept as a couple of as a group. For keeping a group a larger aquarium is needed. Although Channa Andrao tends to be peaceful by nature, confrontations between adult conspecifics will take place, so many hiding places are required. These confrontations, however, are never violent.

Combining a male and female may not automatically lead to a couple. Best is to maintain a group until a couple has formed. First, lower the water temperature. Breeding is initiated by a longer period of a higher temperature and postponed water changes en upkeeping.

After courtship and laying of the eggs, the male collects the egg in the mouth. Within 3-5 days (sometimes longer) the eggs will hatch. The female continues to produce eggs that will not be fertilised and serve for feeding the youngsters. The parental care continues for a period of 2-3 weeks.

Get my BEST updates delivered to your inbox. Join my email list and get my favourite content regularly. Unsubscribe anytime.