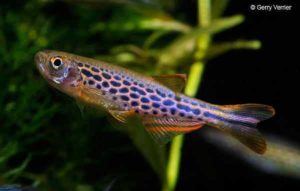 These beautiful Southern Asian fishes are rather shy. Therefore, they are not suitable companions for aggressive or dominant species.

It is hard to see the difference between males and females of this species. Danio nigrofasciatus males are slimmer and have a more pronounced colouration. This difference is especially noticeable during the mating season.

The distribution of Danio nigrofasciatus ranges from the North-East of India, in the state Meghalaya, the more southern state Mon in Myanmar (Burma).

This species is not picky. It will easily accept life, frozen and fabricated foods. Even though this is an omnivorous species, the main diet should consist of carnivorous food. Occasionally, vegetables or algae wafers can be given to increase the variety in the menu.

Danio nigrofasciatus requires some current in their aquarium to mimic the natural conditions. However, the current may not be too strong, a medium levelled flow should suffice. These fish do also prefer a well-planted tank with a dark substrate. This will enhance the colours of the fish. The lid of the aquarium should be closed properly, this species can jump excellently, so an open lid may result in Danios jumping out of the aquarium.

Danio nigrofasciatus is a rather shy species. Therefore, do not keep them with dominant or aggressive inhabitants.

In order to get a high yield, a special aquarium should be set up for breeding purposes. The fish will otherwise eat their own eggs and fry. The breeding aquarium should be decorated with a substrate of marbles or a grid just above the substrate. This prevents the fish from reaching their eggs. The water should be slightly acidic to neutral. Initially, the aquarium should be halfway filled. As soon as the fish are acclimated to the aquarium, adding cool water to the tank can trigger the fish for spawning. The filling of the tank should be done over the course of several hours. This will mimic the monsoon. Spawning occurs in the morning.

After mating, the fish can be captured. Hereafter, the current needs to be reduced as much as possible. The eggs will hatch after 2 to 3 days. A few days later, the fry will start to swim freely. As of this point, the fish can be fed using very fine foods.