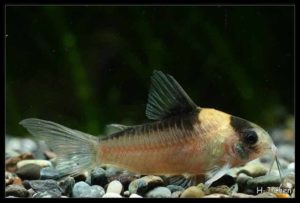 Pterygoplichthys pardalis can be kept in a community aquarium as well as with predatory fish. They grow to about 40 to 50 centimetres long!

Pterygoplichthys pardalis was first described in 1855 by Castlenau, then still as Hypostomus pardalis. A number of synonyms are now known, see the extra information. Their common name is Amazon Sailfin Catfish.

Some specimens can have or develop a rather annoying and aggressive character. These fish can be quite territorial and rough, especially larger / older specimens, against similarly coloured catfish and in case of insufficient space. It also regularly pulls plants from the ground, due to its size, and is able to defoliate an entire aquarium in a short time. It has even been observed to suck on injured or even healthy fish, causing serious injury or even death. Fortunately, these types of “degenerate” specimens are rare.

With a maximum length of about 40 to 50 centimetres, Pterygoplichthys pardalis is a very large fish and therefore needs some space.

Due to its relentless hunger, Pterygoplichthys pardalis is a significant producer of waste, and should therefore be kept in a particularly well-filtered aquarium.

A generously sized aquarium with dim lighting, lots of driftwood (see food), and lots of decor (plants, stones) for shelter is ideal for this impressive, colourful and potentially very large catfish. A young specimen can be temporarily kept in a smaller aquarium (as the only bottom dweller at least 60×30 centimetre. With several bottom dwellers at least 80×40 centimetres. But a full-grown animal needs at least an aquarium of 150 × 60 centimetres and a 200-centimetre aquarium if you want to keep more than one. They can be quite territorial and seriously injure other bottom dwellers.

This species does best in soft, slightly acidic to neutral water, abundant with oxygen and with a lot of current. A particularly powerful filtration system is indispensable, as this fish produces an enormous amount of waste due to its size and diet.

We would like to show you notifications for the latest news and updates.
Dismiss
Allow Notifications