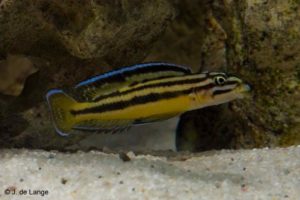 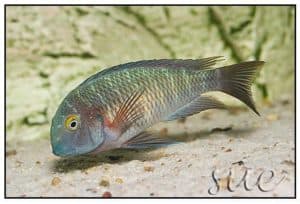 Synodontis multipunctatus or Cuckoo Catfish owes its fame largely to its special reproduction. As with the Cuckoo, its eggs are hatched by other fish.

The scientific genus name can be broken down into the following pieces: “syn” means grown together and “odous” means teeth. This is a reference to the closely spaced lower jaw teeth of the Synodontis. The species name can also be divided into two parts. “Multi” means a lot and “punctatus” means points and describes the dot pattern of this species.

The Synodontis multipunctatus has a rather elongated, slender body. All over the body and head, they have black dots on a gray-brown ground color. Unique for this species is that they have no dots on their stomach and that it is colored white. The caudal fin is “V” shaped which is emphasized by the two black stripes on the two legs of the “V”. The dorsal fin has a black triangle and only at the back has a white hem.

The eyes of Synodontis multipunctatus are very large in proportion to its body, also larger than in the other Synodontis species. This may be due to the fact that in Lake Tanganyika they mainly occur at depths from 40 meters where the light has already dimmed considerably. They usually live in large schools among the rocks. In the aquarium, you should assume that it is a schooling fish and place a group of at least five. They feel safer and come forward more often when they are surrounded by conspecifics.

The difference between the males and females can be seen in different ways: The females can grow to 28 centimeters in the wild, the males stay a bit smaller at 20 centimeters. They usually do not grow that big in an aquarium. The male’s dorsal fin is slightly higher than that of the females. When full-grown, females are slightly rounded than males.

The Cuckoo Catfish is can be found over the entire Lake Tanganyika. They live in zones where rocks and sand alternate. Due to the depth at which they are found, plants are no longer found here. At this depth you also have no exchange of gases such as in the surf zones, the water composition is therefore very stable.

This species is not a difficult eater, everything that is available is eaten, but meat-like food such as all types of live/frozen food, fish eggs, insect larvae and wafers are preferred. They will also occasionally graze the algae in the aquarium.

The aquarium decoration for Synodontis multipunctatus should consist of rocks with holes and crevices between them. They prefer sand on the bottom, just as it occurs in large parts of Lake Tanganyika.

They become quite large fish and must be kept in schools of at least five. An aquarium of at least 1 meter 50 is necessary to provide ample space for all of them.

Like the other Lake Tanganyika species, they like water with a high pH, between 8 to 9 with a hardness of 7 to 11 GH. Aquarium bred Synodontis multipunctatus can also be kept and grown at a lower pH.

It is sometimes claimed to be nocturnal, but this may not always be the case. If they are kept solitary or in too small a group they hardly show and hide among the rocks. The bright light in our aquariums will also play a role in this. As soon as the group is expanded and the light is dimmed slightly, they will come forward again.

If you want to breed with this species you need at least a group five Synodontis multipunctatus, but preferably more. You also need a group of cichlids that will host the eggs. After all, they are called Cuckoo Catfish. In the wild, they almost always use Ctenochromis horei, Pseudosimochromis curvifrons, Simochromis babaulti, Simochromis diagramma and Tropheus moorii. Curiously enough, these species have developed a genetic memory that makes them less likely to play host ¹.

Because breeding with Tanganyika cichlids is more difficult than with Malawi cichlids, often an Utaka from Lake Malawi is chosen as the host in the aquarium. Use one male with about five females so that there is always one ready to mate. Once the female has hatched Synodontis multipunctatus fry a few times, she starts to understand the trick and the yields will drop sharply.

The aquarium should be decorated with enough rocks with hiding places for the Synodontis. If you want the fry to grow up in this aquarium, there must also be many small gaps and crevices where the parents cannot come. The substrate must consist of sand. Plants or even lighting is not necessary (there must be some light, but a little light is sufficient).

As soon as the mouth-brooding hosts spawn, the Cuckoo Catfish gather around the spawning couple. They swim between the pair and eat all the eggs they can find, including their own. Fortunately, the females are able to produce more than enough eggs, so that a few always end up in the hostess’ mouth.

In the wild it often happens that eggs of the Synodontis multipunctatis are scattered around during mating. If these eggs get into a crack or crevice, they are not lost yet. In the aquarium it can also happen that some fry survive without having hostesses.

After a usual gestation period of about 21 days, the female spits out the fry, but this may happen sooner. The dorsal fin is rather prickly and can irritate the hostess, causing her to let go of the fry a bit earlier.

After the young Synodontis multipunctatus have been released, you can immediately start feeding Artemia nauplii. When they have grown a bit, you can switch to the food that you feed the adults.

The drawing is a bit different for the fry. The dots are still attached to each other and form broad black stripes. As they grow larger, the dots become further apart, causing the black bands to become dots.

The Cuckoo Catfish is a fairly easy to keep species that is also suitable for the beginner. Provided the right species are kept, you can also enjoy a very special breeding method. All in all a must-have for the Tanganyika or Malawi aquarium.