Despite being a small fish, the Tanichthys albonubes or White Cloud Mountain Minnow has a whole palette of colours on its body. Generally, its back is dark brown with a faint green hue. On the flank, the brown becomes lighter and its belly is white. A white-blue / black stripe runs from the centre of its flank from the eye to the tail and ends in a black spot on its caudal peduncle. They have red fins with a yellow edge. There is also a natural variant of this species with slightly elongated fins.

This small beautifully coloured species is a real schooling fish and should therefore be kept with at least six specimens. They usually dwell in the middle and upper water layers, occasionally swimming down when they see something edible. They are very active fish that constantly swim around. They are real omnivores, and will eat all types of food, as long as it is small enough. It goes without saying that they should be given a variety of foods.

The White Cloud Mountain Minnow comes from China and is found in the streams and lakes around the White Cloud Mountain. These streams and lakes have large temperature fluctuations. They are therefore very temperature resistant and can tolerate fluctuations from 5 degrees to 30 degrees Celsius. They can be kept in a pond from May to October. After this period it can get too cold and they need to be taken indoors. You can then keep them in an unheated aquarium.

Tanichthys albonubes have become extinct in the wild due to pollution of the waters in the White Cloud Mountains. Around 2011 a new population was found at a different location, but it needs much warmer water than the original population. This heat-loving variant is not (yet) available on the market.

White Cloud Mountain Minnow can also be kept in a tropical aquarium. They do like some currents in the water and can often be found where the currents are greatest. Often in a community aquarium, the school will fall apart for lack of need to form a school. Adding a slightly larger species to the aquarium will make them swim close together again. Make sure that this larger species is not a fish eater, otherwise, you will have no fish left for the school. They are very good swimmers and therefore need an aquarium with a lot of swimming space. At the edges, there must be (many) fine-leaved plants where they can hide.

White Cloud Mountain Minnows are also very suitable for keeping them outside in a pond. You will have to remove the fish if it gets too cold. If you keep them inside in the winter, just set up a tank with enough plants and some floating plants under which they can hide. By keeping them outside, the fish will grow better and get a nice colour. There is also a great chance for a lot of offspring.

Breeding the White Cloud Mountain Minnow is fairly easy. At a constant temperature of 20 to 22 degrees Celsius, the female usually deposits a few eggs between the leaves every day (for lack of a season). The parents hardly ever eat their own fry, so it is quite easy to raise fry with the parents. The eggs hatch after 36 to 72 hours, depending on the temperature of the water. They are then about 4 millimetres in size and the larvae live on their yolk sac for another day. After that day they will swim freely and can be fed with infusoria and very fine dust food. If you feed them well, they will grow fairly quickly.

It is possible to get a litter of 200 to 300 fry at once. Keep male and female separated for three weeks. Feed them well during this period. Put the couple together and they will resume spawning. The female is full of eggs after 3 weeks, so you will now have a large nest in 1 to 2 days. In this method, the parents must be removed. The abundance of youngsters will make them want to eat the fry.

The young White Cloud Mountain Minnows mainly swim on the surface and look for food there. The water must therefore often be changed to keep up the water quality. 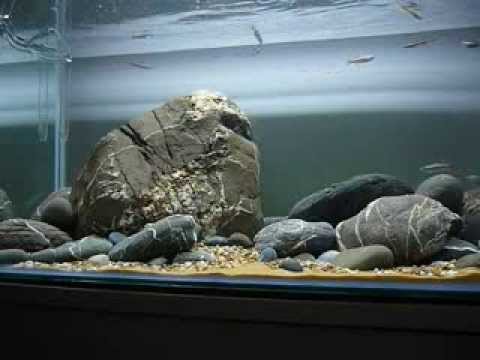